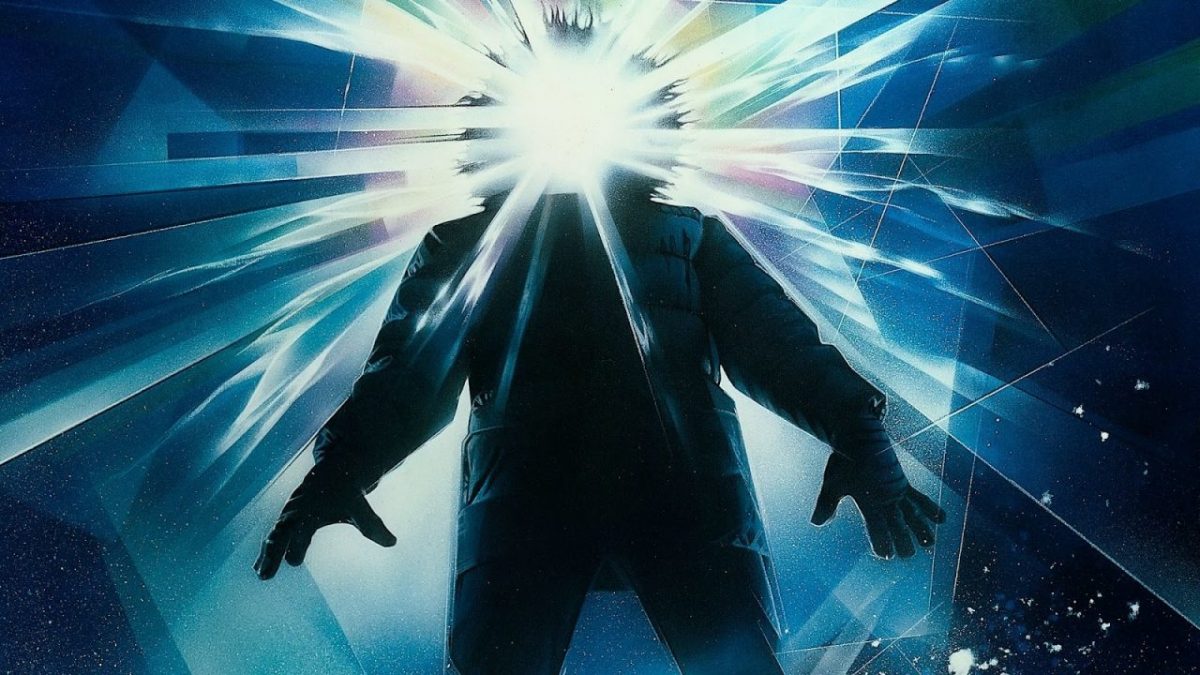 John Carpenter is considered one of the most important horror director of all time.

After the enormous success off Halloween in 1978 and Escape from New York in 1981, there was a certain hype around his new project, The Thing (1982), but unfortunately his fascinating sci-fi/horror movie had the misfortune to compete with ET by Steven Spielberg, a war impossible to win.
The Thing was a big budget movie and its box office failure meant also the failure for Carpenter to affirm himself as a first class director in Hollywood: from that point on he embraced his (sort of) B-movie’s director status and never had another chance to embark in a similar production.

Based on the John W. Campbell novel Who goes there? (1939), this gruesome and thrilling masterpiece is also a quasi-remake of the 1951 Howard Hawks’ film The Thing from Another World to which it differs for its strict adherence to the original written material. The main difference relies in the depiction of the alien creature which is spreading panic and fear among members of a scientific expedition in Antarctica: like in the original novel, the frozen alien creature found by this group of people, once relived by the artificial heating of the base camp, starts killing the members of the expedition one by one, transforming in any living creature it comes in contact with. This means that anybody in the group could be an alien in disguise, waiting the right moment to strike again, and the real humans left alive, as well as the audience, are forced to use clues and reasoning to decide who is trustworthy and who is not, finding the solution to the horrific puzzle. 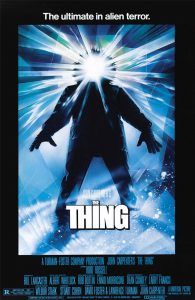 The image I am analysing is the movie poster and it’s part of the promotional material that Universal released to the press when The Thing was distributed. The first thing that strikes the viewer is the colour palette; the poster is clearly dominated by three colours: black, white and blue.
Black could be defined as the symbol of darkness, the unknown, black as the space from where the alien came from; black is actually the absence of any colours like dark could be the absence of any hope, almost as if the characters are left with no hope of survival in this horror story. White and blue is what ice and snow look like; Antarctica looks like an infinite white-bluish desert where our heroes are stranded fighting against an alien which, if not contained, will infect the entire human population in a few days, therefore it seems logical that the very same colours should be used in the movie poster.

Significantly, all around the human figure we see bluish crystals and ice formations, geometric figures which surround and entrap this unknown man who seems to be under some sort of attack. The white divine light coming out of the man’s hood forbid the viewer any identification, it’s literally impossible to identify which one of the main character is depicted in the poster and this mirrors what happens in the movie itself: the characters in this story are left with uncertainty about who has been infected and who hasn’t, and all their fear and paranoia come from this lack of knowledge. Additionally, in the western culture knowledge has always been associated with a white light, often a divine light coming from above guiding men in their life journey; interesting to notice that in this case the light, this divine revelation, doesn’t come from above, but from within, where the horror is waiting.

The movie title appears in capital letters right in the center, below the petrified human being; above it, we see the usual “John Carpenter’s” header, something which acts as a quality signature for a certain kind of audience: when you go to see a movie with “John Carpenter’s” in the title, you know what to expect out of it. In the lower section of the poster, in bluish coloured capital letters, we read the main credits for music, photography, special effects, direction and production; particular and unexpected is the choice of giving an entire line to the main actor, Kurt Russell, Carpenter’s favourite: they shot five movies together.

Could this titling choice be the clue to solve the mystery of the unknown man in the poster?
We know that at one point towards the end of the movie the character named Childs goes out of the base camp and disappears; right in the end, after the gigantic alien is blown up, burned and defeated and MacReady, the character played by Russell, is resting in the snow waiting for his inevitable death by hypothermia, Childs shows up saying he is ok and that he didn’t disappeared but he went out of the base looking for another member of the scientific team. MacReady suspects that Childs could be infected because his story makes little to no sense, but he is too weak to fight back so he offers him a drink from his whisky bottle and invites him to sit down. Childs accepts the offer, but he doesn’t know that this is actually a trap as MacReady is still holding the blowtorch and he is in possession of some dynamite.

The movie ends before any of the two characters make a move and therefore the audience is left with uncertainty about MacReady’s fate.
Given these elements, maybe the unknown man in the poster is MacReady and that line with “Kurt Russell” so prominently displayed in the center could be a clue which leads to the identification of him.
Or maybe this is just speculation.

The Thing is thirty three years old, but it still sparkles vivacious analytical discussions among film critics; this is because of its ingenious narrative and incredibly tense story, something that the poster conveys perfectly.